You are here Home Industry 4.0

Localization in the age of Industry 4.0

The objectives of Industry 4.0 and IoT at industrial level are:

The communication of machine data to the operator takes place either via device software or via configuration files such as IODD for IO-Link or GSMDL for PROFINET. It would be advantageous if machine/device/sensor could communicate directly with the user in his language. 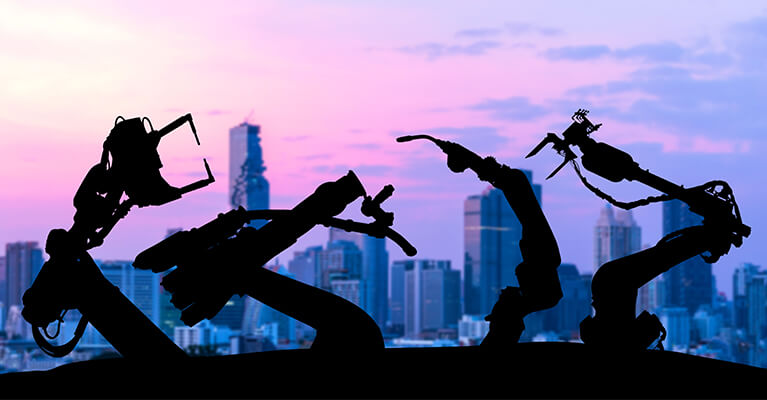 PRODOC is a member of the PROFIBUS user organization. We are therefore always up to date with industrial bus technology, can react to the latest trends and develop contemporary solutions for our customers

In the field of machine-to-human communication, there are many customer-specific file formats, some of which are nested within each other.

We sometimes ask for the translation of XML data with embedded HTML. PRODOC has created its own filter for this purpose. Precisely that what has to be translated is translated and we get valid XML files back!

Configuration files such as GSDML files for PROFINET or IODD files for IO-Link usually contain a separate section that contains information on the status of the process/device. The contents of this section can be stored in several languages and are used for providing information to the operator on the display/PLC/Industrial PC.

PRODOC can process these industry 4.0 configuration files directly in the CAT tool:

In the following we will show how to localize typical file formats for IoT and Industry 4.0 using IODD files and GSDML files as examples.

Do you have data in a special format that you would like to have translated?

Description of device properties via GSDML

GSD files, or more precisely GSDML files, are an integral part of a PROFINET device. In the GSDML file, properties of the device, such as parameters and functions, are described by the device manufacturer.

Part of the GSDML file relevant for translation

Parts of the GSDML file are language information required for the configuration of the PROFINET system and displayed in the programming tool.

This language information is usually available in English, but can also be translated into other languages.

The GSDML file contains the section ExternalTextList with the subsection PrimaryLanguage and further language sections: 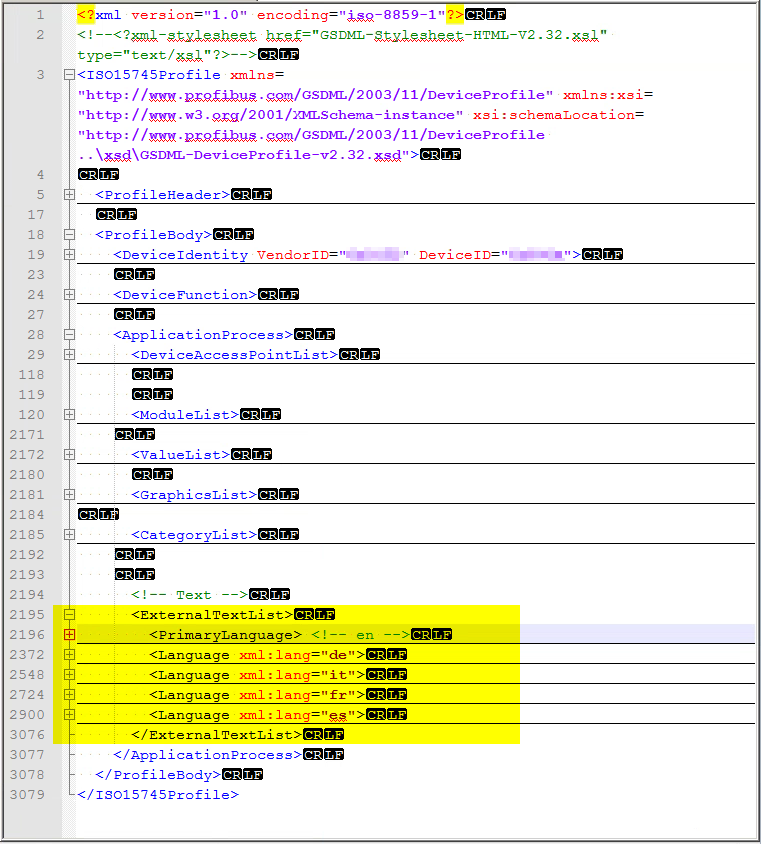 These sections are relevant for technical translation and can be translated directly using memoQ.

Explanatory texts for parameters and functions of the PROFINET device are stored in this section.

There can be any number of other Language sections contained in the IODD file, one section per language.

The translation of the text from PrimaryLanguage is incorporated in these sections.

Set-up of the Language section

In the Language section there are only Text type XML tags with two attributes TextId and Value respectively.

Only the data of the Value attribute has to be translated.

The attribute TextId is a variable that allows the assignment to the respective device parameter for the configuration.

Detailed information can be found on io-link.com.

An IODD file is a XML file with UTF-8 encoding, which is constructed as follows: 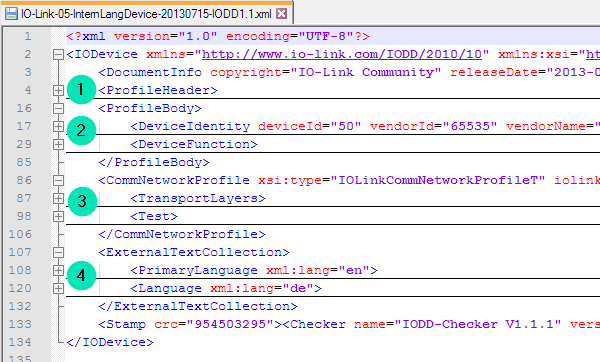 Section of an IODD file that is relevant for translation

Language specific information e.g. display texts for the sensor or actuator and also messages for the PLC can be incorporated into this section.

There can be any number of other Language sections contained in the IODD file, one section per language.

The translation of the text from PrimaryLanguage is incorporated in these sections.

Set-up of the Language section

In the Language section there are only Text type XML tags with two attributes id and value respectively.

Only the data of the value attribute has to be translated.

That is at least risky. The translator has to know exactly what he or she is doing.

XML validation of the translated file is essential.

Copy & Paste by the design engineer

Also here a validation of the file is indispensable!

Translation of the Industry 4.0 configuration file in the CAT Tool with special import filter

This is the most efficient and safest way. The import filter ensures that only the correct texts are translated.

The translations are in the right position after export from the CAT tool.

A validation is not necessary!

The import filter prevents the editing of tags and other texts that must not be translated.

Using an IODD file as an example, we show how configuration files are translated in the CAT tool.

We can import the IODD file directly and translate into any number of languages.

An example of this is a file, which we directly downloaded from io-link.com.

After importing, the IODD file looks like this in memoQ.

The screenshot shows the status during the translation in memoQ.

It is therefore evident that only texts relevant to the translation are displayed and can be processed by the translator. The remaining XML code remains protected.

Advantages of translation in memoQ

The translator can avail of the complete memoQ function range, this includes translation memories, term bases, LiveDocs etc. and can translate rapidly and efficiently in familiar environment.

Integrity of the configuration file is maintained

As only the texts to be processed can be edited, the integrity of the XML data in the configuration file remains securely intact.

Reuse of the translation

The term Industry 4.0 refers to the commonly established naming rule for software updates. The digit before the decimal point stands for major version upgrades. The number 4 identifies the 4th industrial revolution.

The 1st industrial revolution refers to the introduction of the use of water and steam power at the end of the 18th century.

The 3rd industrial revolution refers to the first major impact of digitalization which started towards the end of the 20th century.

The term Industry 4.0 was coined 2011 by Henning Kagermann, Wolf-Dieter Lukas and Wolfgang Wahlster at the Hannover Messe trade fair.

Since then the name has been also criticized. It has been mainly argued that this trend is actually about a further technological development of the first wave of digitalization, i.e. of the 3rd industrial revolution.

How does Industry 4.0 work?

Essentially, Industry 4.0 is about a vision for organization design applied to processes for the automation of companies. This organization design has four aspects: interconnection, also known as Internet of Things (IoT), transparency, assistance and decentralization.

The challenges of the 4th industrial revolution

There are many reasons to believe the pressure of international competition is making for many companies the integration of Industry 4.0 components unavoidable. This evolution to a system optimization is thus a long-term process of unlimited duration, often involving high investment costs. Furthermore, this could result in profound changes to the organizational structure of the enterprises.

Another major challenge is about security. With a high degree of networking, the protection of customer data as well as company internal data is an extremely challenging task: The more interconnected the company is, the higher will be the number of potential security gaps.

Also production processes have to be protected through appropriate security measures, since e.g. machines that are online might risk being manipulated from the outside.

In socio-political terms Industry 4.0 has the potential to plunge the labour market into considerable turmoil. In the future automation will make more and more professions obsolete. How to deal with this issue will be one of the main political challenges of the 21st century.

Indeed the term Industry 4.0 has been coined in Germany and is until now mostly used in the German-speaking regions. Though the trend to interconnection and automation is of course a global development.

Therefore, for example, the use of networking industrial robots has been booming in Japan since the beginning of the 21st century. Also in China more and more workers are being replaced by robots.

In the USA as well, this process cannot longer be stopped. The key term for Industry 4.0 Internet of Things was coined by the Briton Kevin Ashton, who is accountable for crucial developments of corresponding technologies at MIT.

What is the Internet of Things?

This networking of objects is mainly possible due to the development of miniaturized computer chips, sensors and components for data transmission with which all possible everyday objects as well as industrial machines are equipped.

The IoT and its technologies are a central element of the 4th industrial revolution.

The goal of IoT is to make the statuses of the things concerned measurable and controllable. A reaction can therefore take place to certain statuses if necessary in order to improve its usability for the consumer.

Technological basis for the Internet of Things

The development of RFID, radio-frequency identification (a radio technology with which objects became identifiable automatically and without contact using radio waves) is considered to be the fundamental technology of the Internet of Things.

Furthermore, all kinds of sensors and actuators that make the functionality and detection of statuses and the carrying out of actions possible are now also regarded as important elements.

Requirements for the IoT

Low energy consumption, low maintenance costs, a long service life and low manufacturing costs are among the basic requirements of the IoT technologies.

The use of IoT technologies for the mass market is only applicable if they can be used on an extremely large quantity of items in a financially sensible way.

Only then can the potential of these technologies be fully exploited. The demands made of the software also differ dramatically from all previous implementations.

Operating systems with IoT capability generally have storage and energy consumption that are as sparing as possible in accordance with the architecture of the integrated circuits.

Demands made of the Internet of Things

There is a great deal of potential in many areas in the IoT – it is not without reason that experts agree that we are talking about one of the central factors driving the economy of the 21st century.

In order to realize its full potential, the researchers, developers and operators who would ultimately like to integrate the IoT in their products and their production are faced with several challenges.

In order to achieve IoT that is as comprehensively integrated as possible, which is needed in order to make full use of its strengths, it would be beneficial to use components and applications that are as standardized as possible. These standards must first assert themselves on the market.

The more comprehensive a system is, the more prone it tends to be to security breaches. The more interconnected the network becomes, the greater is the potential for damaging the system and causing damage beyond the system itself. Another security factor is the network connection, which is a challenge for the companies using IoT technology.

Another challenge at the moment is the cost. The technologies of the Internet of Things may well be already available, but integrating them into mass production quickly results in skyrocketing manufacturing costs.

If you would like to receive further information on technical translations in the industry 4.0 environment, please use our contact form.