You are here Home Adobe InDesign

Adobe InDesign® is the standard for sophisticated brochures and flyers with a high-quality layout.

PRODOC Translation Agency provides technical translations of InDesign files into many languages. We use CAT tools for efficient and consistent translation.

We know how to implement your layout perfectly, e.g. also in Chinese or Russian. On request, we deliver completely formatted foreign-language InDesign files in the original layout.

Areas of application for InDesign

Optimization of InDesign files for the translation workflow

You will find valuable information on how to prepare and carry out follow-up work on Adobe InDesign files so that the entire workflow for the technical translation with CAT tools is as cost-effective as possible.

More information on the use of InDesign can be obtained directly from the manufacturer.

We assume that the scenario is as follows:

Unlike Microsoft Word files, with Adobe InDesign files you can generally assume that the author has been well trained and knows their way around character, paragraph, table and object formats.

You should check this anyway, and for this purpose you can have the control characters displayed.

In InDesign, you can show the control characters using the menu option Text->Show hidden characters (Alt+Ctrl+I). 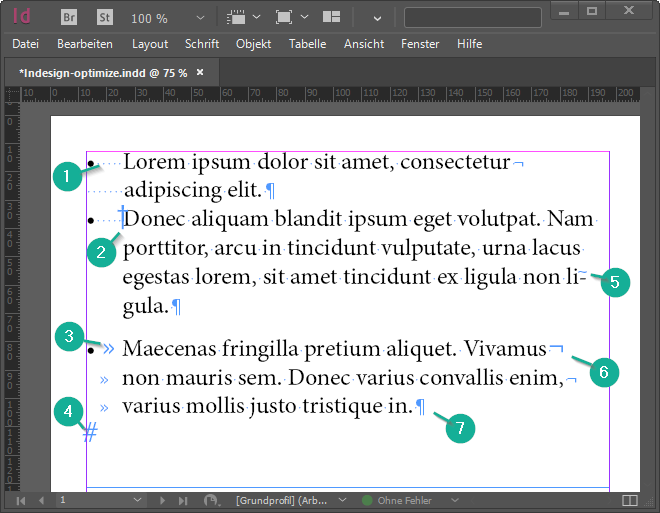 The control characters in the screenshot above have the following meaning:

The following three formats of lists can be found again and again: 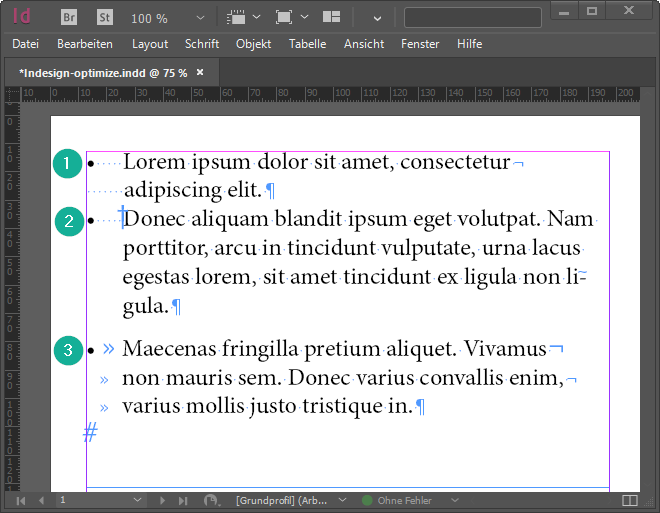 Designers like to work with text frames in InDesign, with which you can place text in the exact location where it is supposed to appear. 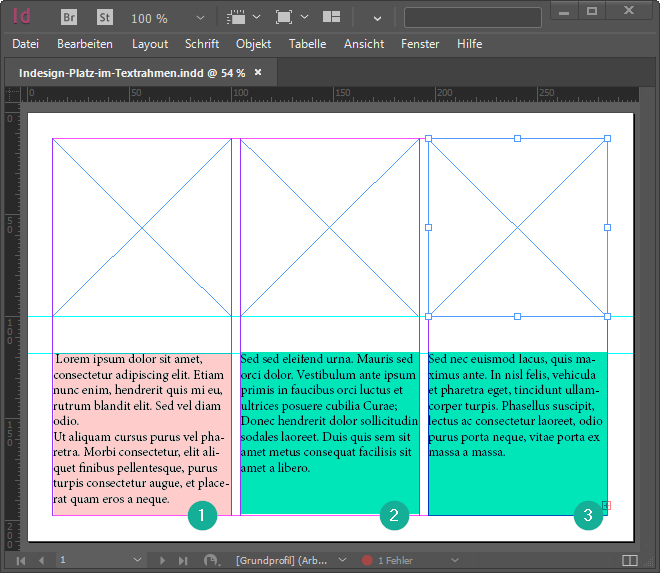 Text frame 1 has very little space and could be too small for translated texts.

Both text frames 2 and 3 provide sufficient space for longer text.

Adobe InDesign has a popular special function: Type -> Add special characters -> Other -> Indent to here.
This character will appear in InDesign like this:

Do not use this special character!

Most CAT tool import filters cannot interpret it correctly, which can lead to layout problems in the translated files.

Make sure text frames are linked to automatically continue text from one frame to the next. 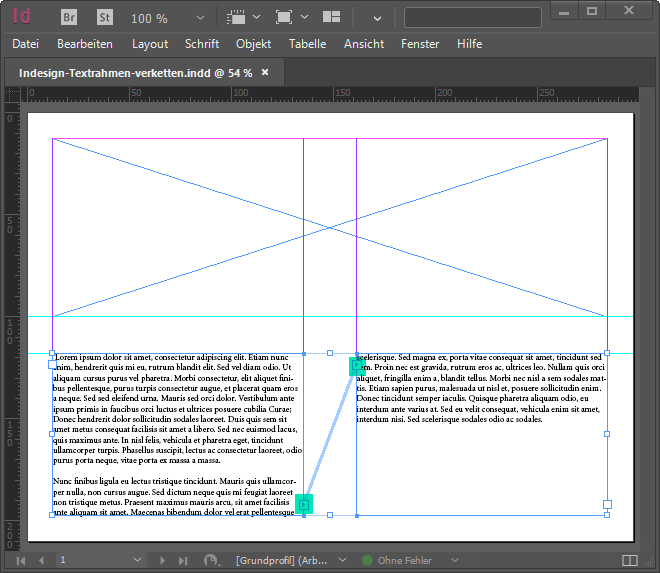 For information on linking text frames in InDesign, see the Adobe Help.

Automatically place text in next frame

For example, you can define paragraph formats for headings so that the paragraph is at the beginning of a text frame.

In the next screenshot, headings formatted in this way are highlighted in green. You can clearly see that the text frames are linked and the text runs from frame 1 to frame 2, although there is still enough space at the bottom of frame 1. 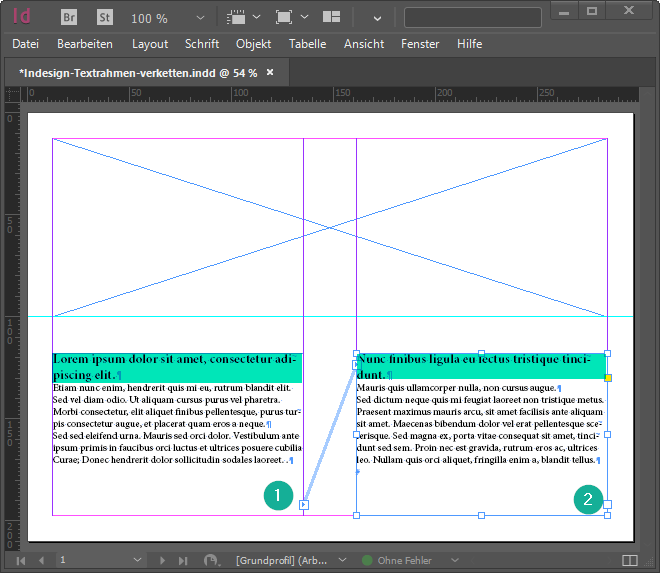 The settings for page breaks with Adobe InDesign can be found under Paragraph format options->Break options. In this specific case, a paragraph formatted with Heading1 always wraps completely with the first two lines of the next paragraph. This prevents orphaned headings at the end of a page.

Definition of paragraph formats for lists in InDesign

Formatting a list of tabs, line breaks, and spaces results in significant formatting effort for the translated file 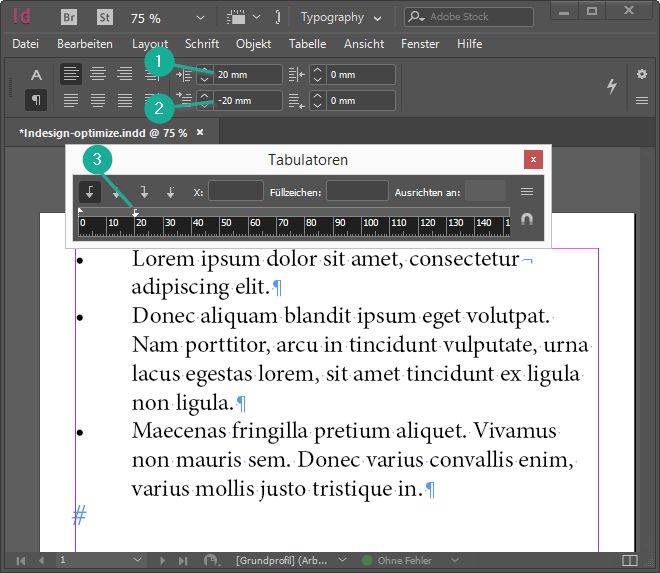 Only the bullet point is at the start of the line, followed by a tab.

The translated text starts after the tab and then flows automatically to the correct position in the next line.

The formatting is always the same, even if the translated text contains more or less lines than the original text.

It is often desirable to keep certain character sequences in the same line. This applies to figures with units (e.g. 8 kg) as well as fixed expressions such as Adobe InDesign. 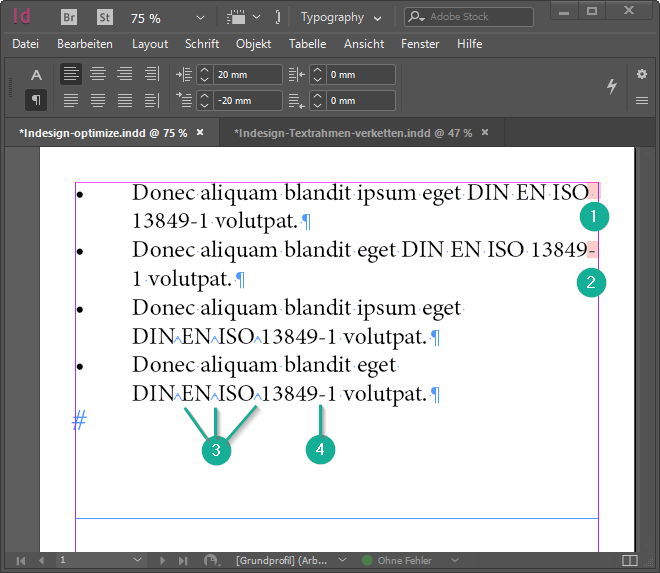 Use the shortcut Alt+Strg+X to insert a non-breaking space.

Advantage: these characters are retained in the translation. You therefore no longer need to check all occurrences of such character sequences for unwanted wrapping after translation.

You can find more information on this topic under Special characters.

Graphics inserted in Adobe InDesign should not contain any language information whatsoever. The CAT tool cannot extract texts from inserted graphics, and these will not be translated.

There are two ways of keeping graphics language-neutral:

In InDesign, you can place text frames over a graphic:

Remove the text from the graphic completely and insert a text frame in the same location in InDesign instead: 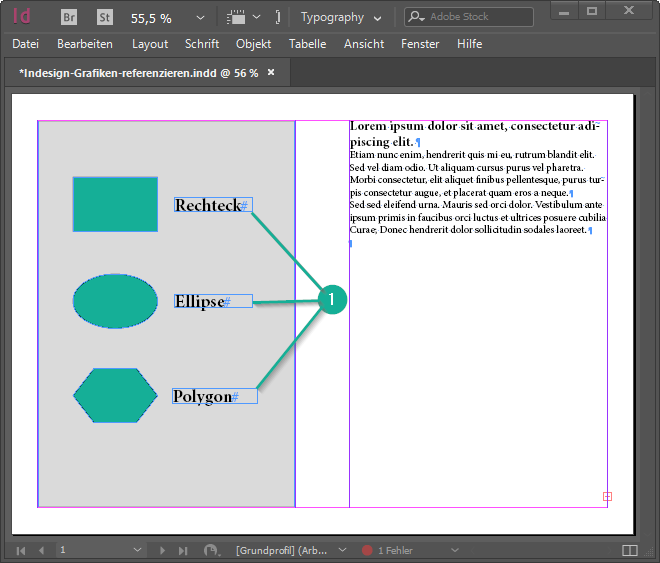 Careful: there can be problems, if there is too little space for text in the graphic. Because the text frames should – see above – have enough space for longer translated text.

Instead, you can also edit the graphic itself and insert numbers instead of texts. 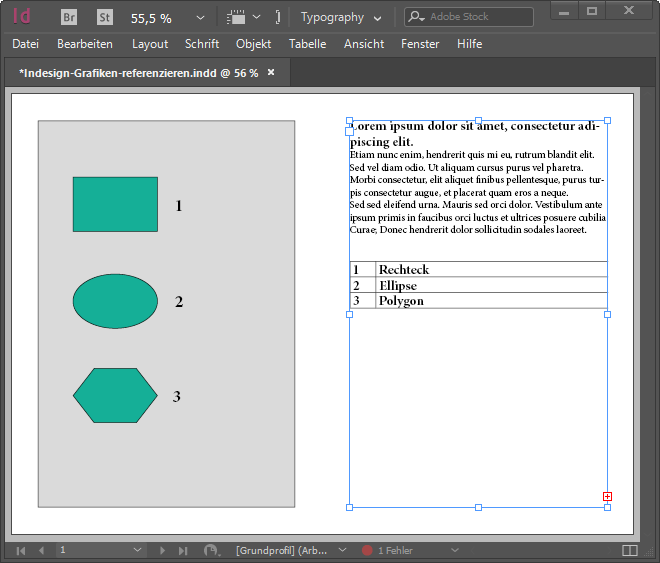 In InDesign, add a table with the numbers and their labels next to or below the graphic.

Screenshots usually have large areas with a uniform color value. File formats which provide good quality with high compression are:

Do not chose the popular JPEG format under any circumstances. This is optimal for photos but can make screenshots illegible.

Naming screenshots in a language-dependent and consistent way

In order to differentiate between screenshots which have the same content but different languages and be able to assign them, we recommend that you use the same filename and add a suffix to identify the language:

We provide our customers all of the possibilities – from translation only up to complete layout processing by us.

If you would like us to take over the entire layout, then please compress all InDesign files, images, screenshots and fonts into a ZIP file. You can then send us this ZIP file via Sharefile. How this is done is described in our Sharefile instructions.

PRODOC translates – the customer does the layout

If you would like to do as much as possible yourself in order to cut down external costs, you can do the conversion into the Adobe InDesign *.idml exchange format. In addition, you can create the required PDF files yourself.

Our translators need to see the original text and graphics. The PDF format can be used for this, since it can be created quickly and is compact. In addition, it can be viewed by anyone with the freely available Acrobat Reader.

InDesign files have the file extension *.indd. If a large number of graphics are incorporated these files can become extremely big because they are stored together with a rough view of the graphics.

The *.indd  files cannot be imported directly into the CAT tool. We require *.idml files to do this.

These can be created easily using the menu item File->Save As...: Select the file name for translated screenshots in such a way that they can be correctly assigned to the German screenshots.

In any case, we require the foreign-language screenshots as a reference for the technical translator even if you want to do the layout of the translated file yourself.

Pack all PDF and IDML files as well as the German and foreign language screenshots in a Zip file.

Carrying out the layout of the translated InDesign files yourself

Copy the folder that contains your own source files for the technical translation, rename it and delete the InDesign files.

To avoid having files with the same name with different contents in different folders, it is recommended to rename every translated IDML file.

Move the translated and renamed IDML files to the location of the original InDesign files and open them.

If screenshots, which now have a foreign-language version in the graphic folder, were linked to the file, the following error message appears:

Acknowledge the error message with OK and then open the linking window with Shift+Ctrl+D. Double-click on the red question mark for each IDML file, and assign them to the correct screenshot.

Even if you have taken all the measures in advance in order to automate the layout of the translated text as far as possible, adjustments to the text and graphics can still be necessary due to differing text lengths.

Depending on the formatting settings and text lengths, the following may occur:

Adapt the page break in accordance with your requirements. It is preferable to use the break options (Ctrl+Alt+K). 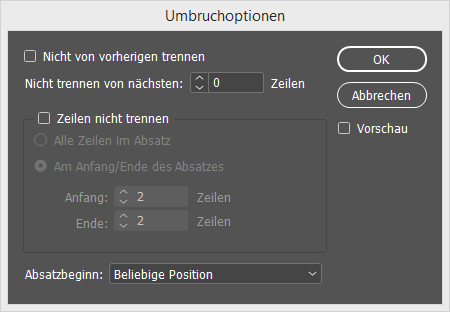 Even if the correct spell check dictionary is already selected after processing with the CAT tool or InDesign, unwanted separations may have occurred due to selecting unsuitable separation specifications.

Examine the ends of the lines in the document and correct any unwanted separations.

The following may occur:

If several text boxes have been used per page, they may be too small.

Text that does not fit completely into a frame is marked with a small red plus sign at the bottom right of the frame: PRODOC can translate InDesign files for brochures and flyers directly. This is highly convenient for us and saves time in the preparation and postprocessing of the files.